Star Trek The Game is quite different from any of the other Star Trek games, not only because of the way you play, but also because it is actually a part of the canonical timeline. It takes place between Star Trek 2009 and Star Trek Into Darkness.

It is easy to get a hang of, yet sometimes you need to think to be able to get further. As it a star trek game you focus on non lethal combat, nevertheless you get to have very big phaser guns and command a starship in battle every now and the, so thats okay.

The graphics are great, not like the movie obviously, but good enough. The characters movements are those recorded by the real actors, which is quite exctiting. 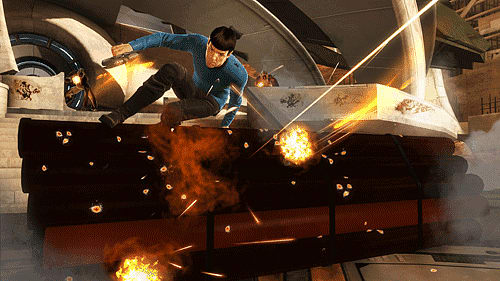 Gameplay is good and the story is well made too, so i urge you to check it out if you are a fan of Star Trek!