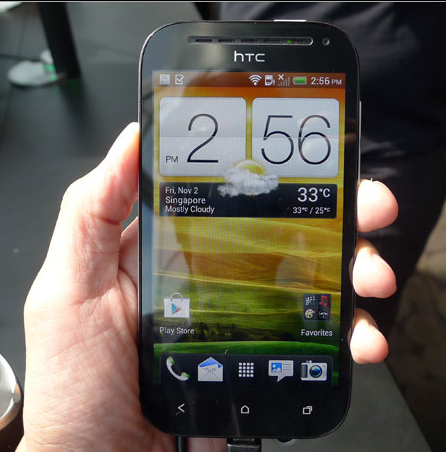 The One SV is the latest in the One Series of Smartphones from HTC. In fact this particular iteration has a lot in common with the VX. The major difference being, that the VX is on the shelves of retailers in the West, while the One SV is currently only on sale in Singapore and will be soon available in other Asian countries and Australia. There is absolutely no mention of when and if the device will be rolled out in our part of the world. There is a good probability that it will not make it here. This device from the Taiwanese manufacturer is a mid range Smartphone, offering pretty good features for an price conscious user.

First off let us take a look at its specifications and main features:
Qualcomm Snapdragon S4 Dual core 1.2 GHz CPU
Uses Micro SIM
One GB RAM
8 GB built in storage expandable up to 32 GB with SD card
4.3 inches screen with LCD 2, the touchscreen is capacitive and has a resolution of 480 by 800 pixels
Corning Gorilla Glass 2
Polycarbonate body
5 MP rear camera with ImageSense technology, autofocus, 28 mm lens, LED flash and F2.0 aperture
HD video recording at 1080p at the speed of 30 frames per second
1.6 MP front camera for video calls and chatting
Beats Audio provides enhanced bass and rich audio experience
HTC Connect for integration with in home entertainment systems
Operating system is Android 4.0 Ice Cream Sandwich, with HTC Sense 4
NFC capability and support for DLNA
GPRS and EDGE technology
Wi-Fi and Bluetooth connectivity
1800 mAh Li-Ion Battery which can be removed and recharged
Has Accelerometer, Proximity sensor and e compass plus a sensor for ambient light
Standard Google apps like Search Maps, Gmail, YouTube, Google Talk
Available in LTE and non LTE speeds
25 GB Dropbox account for 2 years
Seamless streaming for audio and video
Assisted GPS location feature
A little Detail
The camera is really a quick snapper and you can start it up directly from the lock screen. The shutter is nearly as fast as that of the One X and the camera boasts all features found in the HTC One series Smartphones. The one press continuous shooting feature allows you to capture moving shots while recording video at the same time. You can click 4 shots a second… that is amazing. Thanks to the back side illumination, you can now take very flattering photos of yourself, even if the lighting is dim.
The phone is sleek, and comfortable to hold, and at less than 150 grams in weight, is a pleasure to carry in your pocket. The metallic bezel that encases the phone gives it a real cool look.
There is no official word on the battery life but I have a feeling it won’t be too great. Consider yourself lucky if it lasts the whole day, especially with the LTE speeds.
To give a quick verdict, for the asking price ($688) it’s probably a little steep in its category, but a good phone none the less.

This is a guest post is brought to you by Samantha Kirk, a writer for Verizon Fios Deals. Samantha provides up to date content and information