I’ve previously tried Lifeproofs iPhone cases, i literally couldn’t destroy them. And trust me I’ve tried. So could you possibly get the same awesome protection for your iPad? Turns out the answer is yes.

The Lifeproof nüüd will protect your iPad from up to 1.2 meter drops and is waterproof up to 2 meters, also dust or snow won’t do anything to it. All this while still being relatively slim and without affecting touch ability, also you can still access all buttons and the charger port. These are the specifications, however it can take quite a lot more than that. Since the iPad is bigger and more sensitive It might be a bit more vulnerable than the iPhone case, however after trying it i can assure you, it will protect your iPad. Unless you run it over with a monster truck you should be fine.

In terms of usability, it doesn’t weigh that much and is surprisingly slim, it also feels good in your hands.
The case doesn’t have any film over the screen so the touch ability is unaffected, however there is an optional screenprotector included.
It also comes with a back stand / protective cover, which is kind of neat. The one i tried was black, but it also comes in white. 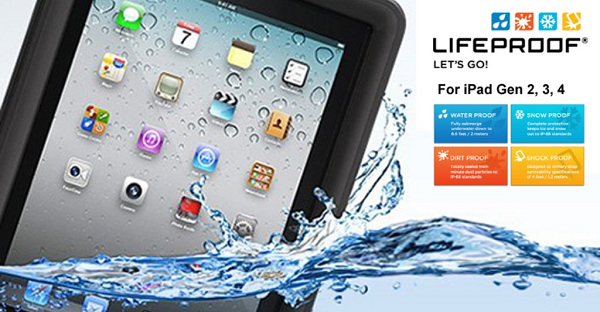