How could a square shaped wheel possibly be more efficient than a round one? That sounds ridiculous at first, but if you think about it, a square wheel would have less contact area with the ground. Not that a regular cube would be of much use as a wheel, this cube however has a special helix shape and the threads are in a sine-wave pattern which combined with the material reduces the surface area that makes contact with the ground, in turn reducing friction and speeding up rotation.

Skateboarder David Patrick’s crazy SharkWheel was discovered by chance while he was creating a cube out of six soft pieces of piping. Patrick dropped the cube by accident, and to his amazement, the piece started rolling and it didn’t stop.

Since he is a skateboarder, Patrick immediately applied the square wheels to his skateboards, creating a triple-layered prototype for skaters around Venice, California to try it out. If you ever tried a skateboard you’ll know they pretty much only work on flat surfaces. But with the SharkWheel your skateboard can go much faster on much rougher terrain without compromising stability. Not bad! 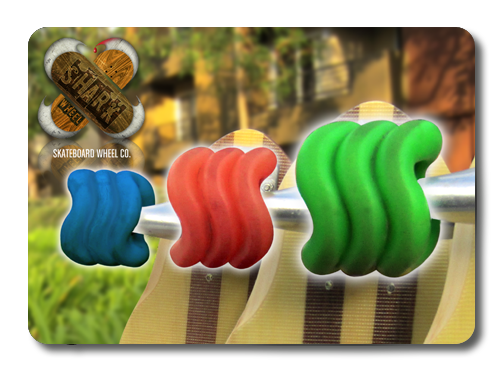 Now take a look a these demonstrations.

The kickstarter project for the SharkWheel has already far exceeded it target goal. You can find it here.