This is a new product from Autodesk and Sculpteo which seems very nice. It allows you to create “Creatures” in 3D on your ipad, (Reminds me a bit of Spore). And then print them from a 3D printer. The reason this is so good is because usually 3D printers are very difficult to handle, everything has to be exact scale in your CAD software etc.. So kids cant exactly make their own toys. However this seems like a really good solution.

Now, i realize not every household has a 3D printer, but one day a 3D printer might be as vital as a refrigerator. And then how great isn’t it that your kids can make their own completely unique toys?

3D printing at your finger tips: Generate real 3D creatures from the iPad!

Thanks to Autodesk’s 3D software and Sculpteo’s ultimate online 3D printing technology, it has never been so easy to manufacture amazing real 3D creatures.

Paris, France – February 14, 2013.  Sculpteo announces a new partnership with Autodesk for the launch of their iPad app 123D Creature. This new app enables anyone to create 3D characters using the interactive interface and to be able to print their designs and receive them in the post via the Sculpteo service. 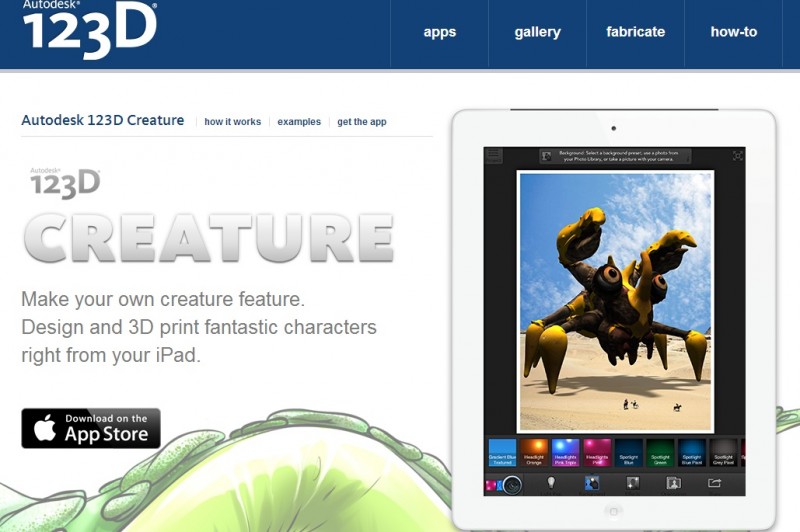 Creating original characters with Autodesk 123D Creature starts with a simple skeleton creator where users lay out the basic anatomy of their creature in digital clay. Multi-Touch gestures allow users to thicken, stretch and sculpt their creature with many of the tools familiar to users of the popular 123D Sculpt App.  Once finished sculpting and shaping, a creature can be airbrushed or adorned with textures imported from the user’s iPad photo library. To show off a finished creation, users can bring the creature into the render room where they can customize lighting and shadows, apply filters, and import background photos to generate amazing images to share with their friends.

‘Click to print’ with the Sculpteo 3D printing Cloud Engine

People can easily order a 3D print of their creature from the 123D Creatures app that will be mailed directly to their door because the app is fully integrated into the Sculpteo service.  Sculpteo are pioneers of the ‘mass-customisation’ revolution and this is an example of how 3D printing enables bespoke objects to be created and printed according to demand.  Users of the 123D Creatures app can change the size of their creature and have it printed in different materials. Sculpteo’s factory houses a large range of the latest 3D printers which can print over 45 different materials, some of which will be available to users of 123D Creatures. 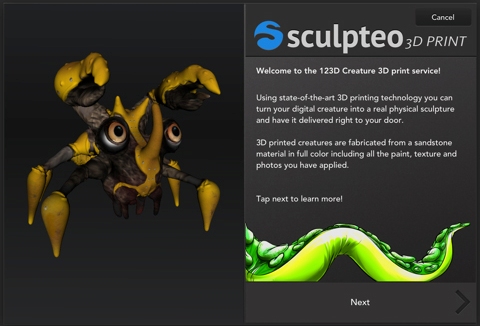 Clément Moreau, CEO Sculpteo: “The 123D Creature app is a great example of how the Sculpteo 3D printing Cloud Engine is being integrated into new innovative apps and software. We are able to make the latest 3D printing technology available to people via this creative app simply by integrating a Sculpteo button which enables people to transform their 3D designs into real objects.”

Samir Hanna, Vice President of Consumer Products at Autodesk: “Now, for the first time, 123D Creature makes it easy for anyone to create a sophisticated creature on an iPad, and then have a 3D printed object delivered to their doorstep with a few swipes of their finger. With the 123D family, we strive to put powerful 3D technology into the hands of anyone who wants to be creative, and we look forward to seeing the creatures people will create and share with the community.”

Availability: The Autodesk 123D Creature App is available exclusively from the App Store on iPad or at http://appstore.com/AutodeskInc/123DCreature. The app will be priced at $7.99, but offered at a special launch pricing of $1.99 for a limited time period.

Founded in 2009, Sculpteo offers customers a fully online 3D printing service and the opportunity to convert 3D files into 3D printed objects. The Sculpteo online platform is designed to make this new technology easy and accessible to all by offering e-manufacturing service customers can print objects in a range of materials. In addition to affiliates, Sculpteo can outsource its production to 3D Print facilities physically located close to end users. Sculpteo also owns its 3DPrinting facilities in Europe.

Companies which have already partnered with Sculpteo and have integrated the 3D printing Cloud Engine into their site include:

– The Society for Printable Geography