We all know google has secrets behind their doors, alot of them. Slides instead of stairs for the staff, google segways, google bikes, google everything. But there are some secrets not even the staff know about, and thats whats going on inside their server halls!

First off, to save money and the nature Google has started using sewage water that cirkulates through their servers to cool them. This is quite revolutionary, since it really does save the nature, big time. Earlier they used drinking water flowing through the server computers and then out the drain, but then they (obviously) realised their servers dont need water clean enough for drinking to cool their systems. So now they use filtered sewage water! Great way to cool your equipment, save nature, and some money too.

Now to the secrecy.. Inside the massive data centers run by Equinix, the lights are on in some cages, but off in others. Photo: Peter McCollough/Wired.com

Apparently google is so very concerned about spies checking out what hardware they use that they keep their servers in complete blackdown. Not to talk about the security to get in there, they also want it that way that if you do get in, you cant see shit basically. What you see on the above image is the part that is lit, now imagine the darker parts.

As for the staff and technicians they get a set of gear similar to mining equipment feauturing one of those hard ats with a light.

About two years ago, Chris Sharp says, Google unscrewed all the light bulbs inside the hardware cages it occupied at that Equinix data center. “They had us turn off all overhead lights too, and their guys put on those helmets with lights you see miners wear,” he tells Wired. “Presumably, they were bringing up custom-built gear they didn’t want anyone else to see.”

One of the interesting things about Google’s approach to technology is that it uses shipping containers packed with tens of thousands of cheap home-made PCs instead of rooms full of expensive mainframes. However, it hasn’t previously revealed any of the details. That’s what it did at a conference yesterday, and CNet’s Stephen Shankland has published the story and photos.

Among the secrets: each server has two processors and its own 12-volt battery to supply power if there’s a problem with the main source of electricity. Also, each shipping container holds 1,160 servers and can consume 250 kilowatts. 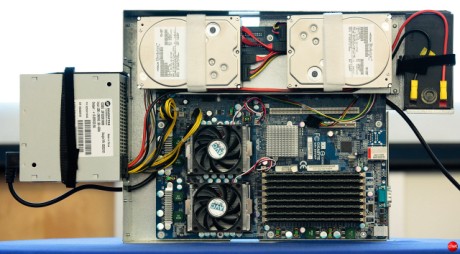 The Google server was 3.5 inches thick — 2U, or 2 rack units, in data center parlance. It had two processors, two hard drives, and eight memory slots mounted on a motherboard built by Gigabyte. Google uses x86 processors from both AMD and Intel, [Google server designer Ben Jai] said, and Google uses the battery design on its network equipment, too.

This is what we know, what dont we know??