We’ve had plenty of pre-knowledge on this, but surprisingly this is our first actual glimpse of Google’s new unbranded “Cr-48,” the very first Chrome OS laptop. Google will distribute the laptop through its Chrome OS Pilot Program, in a sort of public beta. You actually have to apply to join the program, and there are going to be a limited number of the laptops available — retail Chrome OS models from Acer and Samsung will be available in the middle of 2011 for the masses. Google’s doing a number of little promotions to give away the devices to interested users and businesses which will provide feedback, and it looks like there’s no way to actually pay money for one right now.In case you’re wondering about the name, Cr-48 refers to an isotope of the element chromium (though you’ll probably see it spelled Cr48). It’s a pretty clever naming convention on Google’s part and, if nothing else, they’ll avoid any unnecessary lawsuits like when Google named their first phone the Nexus One. Now, for the specs: 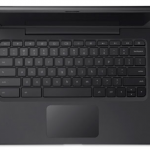 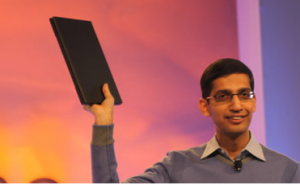 It looks okay for a netbook. Google says no windows 7 will be possible to install on it. And about the caps lock button being replaced with a search button.. there is a caps lock mode.

So what do early users think of it?
Hardware

* The entire body is made of a soft, beautiful matte black. It feels very Droid-like, just a little less rubberized.
* Overall, it looks a lot like a black MacBook, including a magnetic latch with a split spot for getting your finger in and lifting the lid, a very similar keyboard, and a similar hinge design.
* There’s on of those large Envy-style clickpads. It has great multitouch scroll, and great general mousing feel (better than most Windows laptops), but it also has some of that Envy trouble of disliking a finger floating on the lower part of the pad. Basically, you have to click or mouse, you can’t be doing both at once.
* If you don’t like the ClickPad you can always attach as USB mouse. We plugged in the Logitech Anywhere MX and have been mousing away.
* The matte screen overwhelms us with gratitude. Thank you, Google. Thank you.
* There’s ultra-wide ctrl and alt buttons on the left side, thanks to the lack of a Windows Key. * It starts up instantly, and it’s actually really hard to tell if we’ve put it into standby or not because there are no drive noises, and we haven’t hit upon any fan noise yet either.
* We’re having trouble installing Photoshop.
* Our apps haven’t synced over from our desktop’s copy of Chrome, which must be a still-forthcoming feature.
* You need an internet connection for the very first setup and login, but you can login to an existing user while the device is offline, and access anything that’s cached or HTML5-stored on the device — like some of those new Chrome Web Apps.
* While wake from standby takes less than a second, a cold boot takes around 15 seconds to get to the login screen, and another 6 or 7 seconds to login after you’ve entered your password.
* The remainder of our impressions will be about Poppit!.
* Flash is really bad, both with general applications and particularly with video. Adobe hasn’t built Flash acceleration yet for Linux, and there’s not a hardware acceleration chip, either. Hulu is like a slideshow, YouTube works, but not great.

Now it is on sale, but only for a few selected developers. Then again if you wanna go that far you could get a job at google..