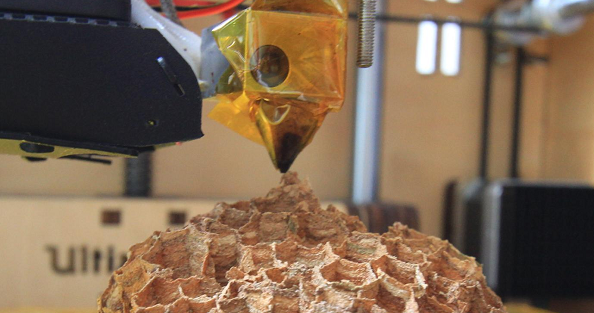 NASA is planning to 3D print a whole range of bio materials, including wood. NASA seems to love 3D printing, other plans they have include 3D printing a moonbase and food for astronauts.


The Stanford University researchers have been working long hours honing a three-dimensional printing process to make biomaterials like wood and enamel out of mere clumps of cells. Pundits say such 3D bioprinting has vast potential, and could one day be widely used to transform specially engineered cells into structural beams, food, and human tissue. Rothschild and Gentry don’t only see these laboratory-created materials helping only doctors and Mars voyagers. They also envision their specific research – into so-called “synthetic biomaterials” – changing the way products like good-old-fashioned wooden two-by-fours are made and used by consumers.

portraitsHere’s their plan: Rothschild, an evolutionary biologist who works for NASA and teaches astrobiology at Stanford, and Gentry, her doctoral advisee who is trained in biology and mechanical engineering, are working with $100,000 they received last fall from the space agency’s Innovative Advanced Concept Program. They say they’re on track to prove their concept by October: a three-dimensional printing process that yields arrays of cells that can excrete non-living structural biomaterials like wood, mineral parts of bone and tooth enamel. They’re building a massive database of cells already in nature, refining the process of engineering select cells to make and then excrete (or otherwise deliver) the desired materials, and tweaking hardware that three-dimensionally prints modified cells into arrays that yield the non-living end products.

“Cells produce an enormous array of products on the Earth, everything from wool to silk to rubber to cellulose, you name it, not to mention meat and plant products and the things that we eat,” Rothschild said. “Many of these things are excreted (from cells). So you’re not going to take a cow or a sheep or a probably not a silk worm or a tree to Mars. But you might want to have a very fine veneer of either silk or wood. So instead of taking the whole organism and trying to make something, why couldn’t you do this all in a very precise way – which actually may be a better way to do it on Earth as well – so that you’re printing an array of cells that then can secrete or produce these products?”

Sounds an awful lot like a Star Trek replicator to me. Incredibly cool

But this technology they are working on is somewhat different than other 3D printing technologies. Instead of directly 3D printing wood it’s more like it 3D print cells that can in turn ‘grow’ wood
The setup involves putting cells in a gelling solution with some sort of chemical signaling and support into a piezoelectric print head that spits out cells that form a gel-based 3D pattern.

While the technology is still far from being used the team is very optimistic that it will succeed. In fact they believe they may be able to improve upon existing materials.

They envision products like wood reinforced with carbon fiber, or equipped with copper nano-wires that change its electrical conductivity, sitting someday on hardware store shelves.

“If you looked at a piece of plastic, by in large, a small piece of it is just like a large piece of it; this is not true of most biomaterials,” Gentry said. “They have very interesting properties and structures on a micro or sometime molecular scale that stack and create these sort of emergent macro-scale properties. So they behave differently in different directions. We are trying to show that we can manufacture these materials so that those really fine-grained properties work for us.”