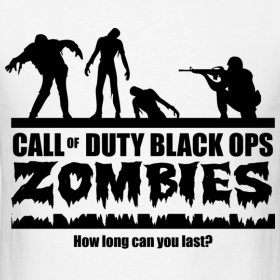 These quoetes where not written my me, they where colected from an imageboard. Some of them are quite interesting. Enjoy
ITT: we share our experiences while playing zombies
idiots, highest rounds, anything.

>playing with 4 people
>asshole tries to tell us what to do
>”alright guys let me kill the crawlers i need more points”
>he has 60k points
>”guys alright i bought speed cola, wheres the quick reload??”
mfw

>too lazy to turn mic on
>kid assumes i never played zombies before
>”alright guys we’re going to unlock pack a punch. do you know where pack a punch is?”
>implying i dont know when ive made it to round 43

>Don’t own a 360 or any CoD game
>Use my friends’ whenever I’m over
>Free Live weekend
>Me and other guy there decide we’ll fuck around on Blops because we never play it, and want to give it a chance
>Join random match, 2 other guys looking to play with people
>obviously internet buddies
>Basically experts at the game
>My friend knows more about it than me, but still nothing compared to these guys
>Other guys get angry when they have to work as a team
>Think that the idea is to be able to solo in 4 four separate rooms
>Refuse to pick us up

>promise friend I will help him with the massive shangri la easter egg
>takes fucking hours
>immensely frustrated
>get to the end, ecstatic that it’s finally over
>friend takes the meteor, gets all perks
>everyone else all has four perks and double packed weapons
>have calamity and jane
>finish the night by just fucking bum rushing across the map and doing whatever we feel like
>bro as fuck