Dyson, the company known for vacuums, unique fans, hairdryers, and other cool gadgets, just let me know that they released a video yesterday. The video is reminiscent of the creepy puzzle video that was sent to us roughly a year ago. (It was published almost exactly a year ago actually)

The Dyson video includes peculiar noises and flashes, and when solved will take you further down the rabbit hole.

The purpose of the video is to recruit the bright minds who are able to solve it. Which is a pretty cool use of the puzzle video concept.

“Dyson are looking to find the world’s brightest minds, by setting a series of unique challenges to be solved. The first challenge is hidden in this video. It is one of four challenges. And the winner will be invited to Dyson’s Technology Campus in Wiltshire, to meet Dyson’s CEO.”

You can see the video yourself here:

It was announced on the company’s LinkedIn page this afternoon that ‘the key’ had been found, and then a link to their careers page.

That was pretty fast, but Dyson says that there’s still more to come. And that it will only increase in difficulty.

This is what I found on the actual deciphering of the puzzle. If found it on the ‘Rethinkers’ subreddit, which you can find here. 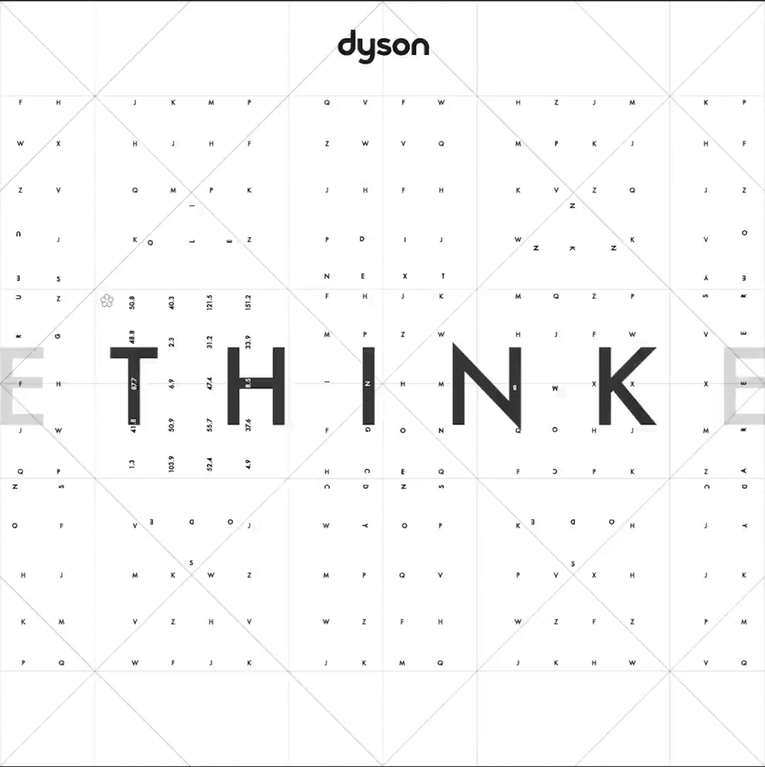 It’s GPS Coordinates. It’s always GPS Coordinates. That said it’ll make this a lot easier. You do a quick search on where the Dyson offices are and you’ll find out that there are a few numbers on the key that are really close to the headquarters.
So where exactly does the key tell you it needs to be? Well gathering from FelixJMorgan “There’s some phasing to make sure it isn’t solved instantly, but there’s also incremental logic that means you’ll only be able to solve it all if you’ve done it all yourself.”
This is a multistep puzzle where there are going to be many little pieces that will all add up to one piece.
After Hint #1 we’re given 3 numbers: 48.8, 47.4, 52.4
If you look on the key you’ll find those three numbers (I’ll come back to this in a bit).
WHAT DOES IT MEAN?
Well, do a quick google search on “Dyson offices USA” and you’ll find out they’re in Chicago (600 W. Chicago Ave Suite 275. Chicago, IL 60654). Do another google search and you’ll find out the GPS Coordinates (41.8975186, -87.64397810000003). BOOM! There it is.
Now go back to your key. 2 numbers are extremely close to those coordinates 41.8 and 87.7. So are we done? Maybe. Anyone want to hit up latitude 41.8 and longitude -87.7°? Be my guest. But hold on. This might not be the last of it. It might be. It might not. But this is how we’re going to find out at the end.
Let’s go back to the key.
With the clue about a ‘incremental logic’. That tells me they’re going to slowly eliminate each and every one of those numbers until all you’re left with are a couple of numbers. It’s a pretty common puzzle practice. I first saw it on murder mystery children’s books in middle school. Right now they’ve eliminated 48.8, 47.4, 52.2.
41.8 and -87.7 will not be eliminated in the end and the prize might be at the residential address at those coordinates. BUT there might be a few more clues in order to eliminate all the numbers on the key except 4. I’d put good money on the fact that 41.8 and 87.7 are the first two numbers on the key that won’t be eliminated.
The key still has more numbers left to be eliminated. But if I were in Chicago, I’d start plugging in the top numbers into my GPS (I’d also eliminate 1.3 as an option right now because no GPS coordinates will start with a 1.3). As more clues are released, more numbers will be eliminated.

It won’t be in their offices. The coordinates don’t add up. But there are a few places that are close to their offices, which makes more sense.
Because they haven’t released all the numbers at this point if you want to skip to the end you have to guess and check. Otherwise you’ll have to wait until all the numbers and clues have been released.
There’s a residential address that Reddit won’t post, but you just plug in 41.8 Latitude, -87.7 Longitude.
Unless they’re going degrees, minutes, seconds. This one would get tricky because you’re looking at an area in Wheatfield, IN. And if they’re plugging in seconds as well, it’s more of a geocaching event that might be something incredibly small. I don’t think it would be in Wheatfield Indiana, but I wouldn’t be surprised. It’s still within driving distance and no one would happen upon it… Imagine Dragons did something similar in the middle of the desert. So you’d guess and check with 41 ° 8 ‘ (x)” and 87 ° 7 ” (y) then start plugging in the remaining numbers into those coordinates until you find something. Might be time consuming, but again, we’re skipping to the end before all the clues have been released.
A third option and now that I think about it as the most probable, is they’ll narrow down the options to like four or six numbers then have some big final clue that will tell you how to combine the remaining numbers to get the big ‘final number’.
Once you have the final GPS coordinates it will be a race to the finish. That’s how they’ll guarantee there will be one winner. One prize… first one to get it wins.

Hey, at least they weren’t for the White House this time.. The reason I think so is because there was another picture that was posted on Monday. That one lacks the yellow line and the numbers around it. If you decide to join in and try to solve it, good luck!

If this doesn’t seem intriguing enough, keep in mind that PWW still has unsolved puzzles as well.

If something interesting happens, we will publish an update on this page.

Signing up for the mail list in the sidebar is a good way to stay updated.