Did you know that anyone can get raw data from the Hubble space telescope? Now you do!
And here is how to turn this raw data into those beautiful Hubble images that we have all come to love.

It’s great practice for amateur astronomers as the process is the same with your own data if you use narrowband filters. Besides, a lot of the raw data from hubble hasn’t been fully utilized, and on some targets you could make a better image than there currently is!

To do this you need Photoshop and at least basic skills using it. This is way harder than it looks!

I will only be showing you how to combine the black and white exposures of different wavelengths into full color images. To get accurate colors and to work out details you still need to be pretty good with Photoshop

Also before you can start getting data from the Hubble legacy archive you need a program to convert the raw (FITS) files into workable images. You can get that here.

When you have that installed you can go search for an object in the archive.

Some targets are easier than others, some require stitching together many incomplete frames and much more detail work. Don’t just go for the first thing that pops in your head, the Andromeda galaxy or the Orion nebula are hard objects and the data has already been utilized to it’s full potential. For this example I’ll be using ARP 147 because there are only three different wavelength exposures which makes the RGB conversion relatively simple. When we chose what data to use we need to look under ‘Spectral_elt’ where we can see which wavelength of light was captured on that data. Lower wavelengths are redder and higher wavelengths are more blue, green is somewhere in between. We need at least one red, one green and one blue image to make a full color image.

If you click on ‘Display’ you can preview an exposure. Under ‘Detector’ the best choice is data from the Wide Field Planetary Cam 2 (WFPC2), but data from other detectors are also very much usable, use the display function to see if an exposure can be turned into a good image. For this example we’ll be using data from the NICMOS (Near Infrared Camera and Multi-Object Spectrometer) and the ACS (Advanced Camera for Surveys).

The first thing that surprised me when I started doing this is how.. well, shitty, the Hubble raw images are. I expected them to be glorious even unprocessed, but most of them are just noisy and with huge gaps in them. But not to worry, the data we need is still there. 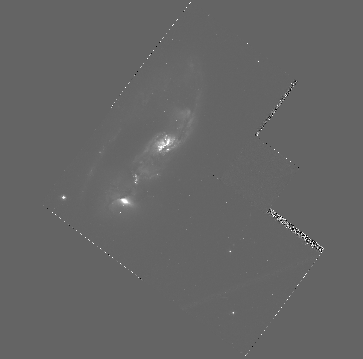 Anyway, now we can start turning those raw files into Tiff images using the FITS liberator. Just start up the program and chose the first FITS file to process. It will look something like this. Now you need to find this menu: This is the algorithm used to enhance the image, you can try anyone you like, but I prefer the highlighted one (ArcSinH(x)).

Now what you want to do is adjust the sliders (or numbers) for the black level and white level. Try to get out as much detail as possible and leave only a little of the background noise (we’ll get rid of it later in PS). Something like this should be the result, now do this for all three exposures.

When you’re done it’s time to fire up photoshop and load your exposures in one document on different layers. For this example the images will already be aligned. To get rid of the last of the background noise use the Exposure tool and decrease Offset (use numbers as the slider is too insensitive for this job).

When you have done this to all your layers it’s time to add some color! Use the hue/Saturation tool and make sure you’ve clicked ‘Colorize’. Just make one very red, one very green and one very blue (30-50 saturation is usually good), we can tweak the colors later. Now you should have three colored images like this. (I moved them out of alignment for demonstration.) Now start changing the opacity of the layers until you have something like this: If you can’t get the colors quite right try changing which layer is on top, or go change the colors of the individual layers using Hue/Saturation.

That’s pretty much it, now it’s up to you and your Photoshop skills to tweak the colors and sharpness. Good luck, and have fun! :) Here are some other Hubble images I’ve processed: This was a fairly basic tutorial, for a more extensive explanation of the same thing check this out. You can also search for videos on youtube.