Can A Monkey Own The Copyright To Its Own Selfie? 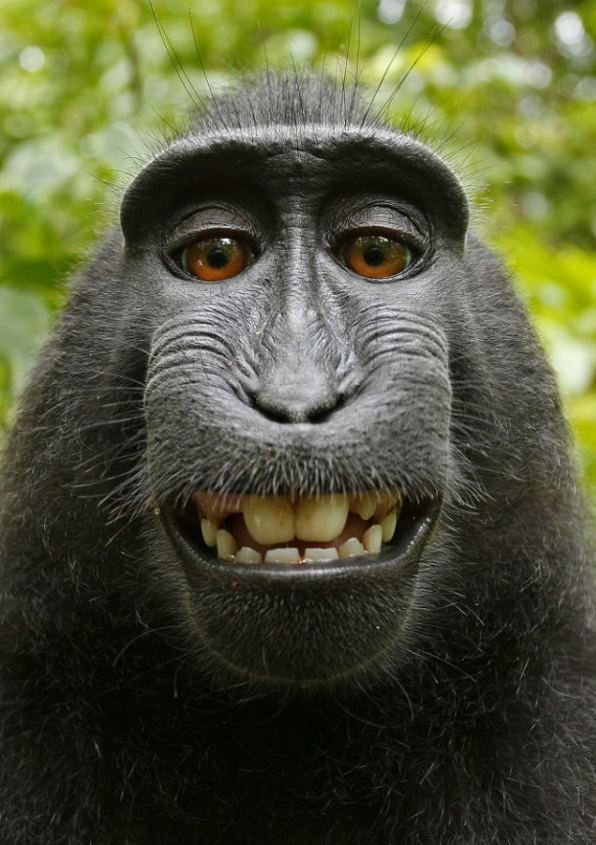 According to Wikipedia it can. This monkey snatched the camera from a photographer and snapped a few random pictures, including this one.
The image ended up on a wikipedia page, this apparently upset the photographer and he sent a takedown request. Wikipedia denied the request on the grounds that the monkey owns the copyright to the photo.

An English nature photographer is going ape over Wikipedia’s refusal to remove pictures of a monkey from the online encyclopedia that he says are being displayed without his permission.

Wikimedia, the operation that runs Wikipedia, says that the public, not photojournalist David Slater, maintains the rights to the works. That’s because the black macaca nigra monkey swiped the camera from Slater during a 2011 shoot in Indonesia and snapped tons of pictures, including the selfie and others at issue.

“We received a takedown request from the photographer, claiming that he owned the copyright to the photographs. We didn’t agree. So we denied the request,” Wikimedia said Wednesday in its transparency report.

The picture is among the thousands the site makes available for free under its Wikimedia Commons, a fact that Slater says is costing him royalties. The picture went viral in 2011 when the media reported on the selfie. “He must have taken hundreds of pictures by the time I got my camera back, but not very many were in focus. He obviously hadn’t worked that out yet,” Slater told The Telegraph in July 2011 as he described the monkey hijacking his gear.

The image has at times been removed from the Wikimedia Commons by various site editors.

“If the monkey took it, it owns copyright, not me—that’s their basic argument. What they don’t realize is that it needs a court to decide that,” Slater told the Telegraph Wednesday.

Slater said the picture should not be in the public domain. “They’ve got no right to say that it’s public domain. A monkey pressed the button, but I did all the setting up,” he said.

But Wikimedia countered, saying, “To claim copyright, the photographer would have had to make substantial contributions to the final image, and even then, they’d only have copyright for those alterations, not the underlying image. This means that there was no one on whom to bestow copyright, so the image falls into the public domain.”

Related articles across the web