By Johny / 7 years ago / Cool, News, Science, Technology / No Comments 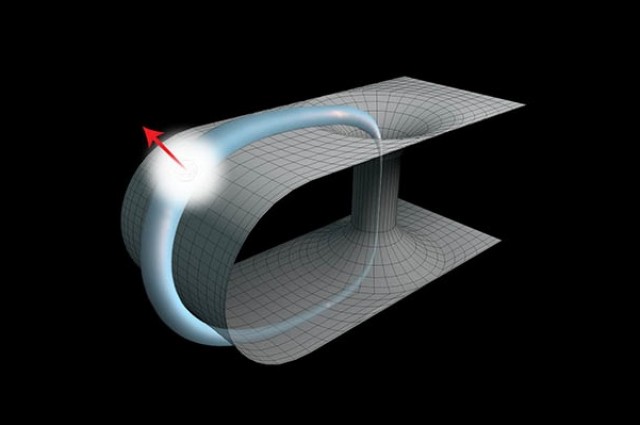 We are still nowhere near practical time travel using matter. But scientists at the University of Queensland have managed to send light into a sort of time loop. They used individual photons to replicate a quantum particle traveling through a space-time loop to arrive where and when it began. This could potentially be the first step towards at least communicating with other time periods.

It might be time for a temporal prime directive.

“The question of time travel features at the interface between two of our most successful yet incompatible physical theories — Einstein’s general relativity and quantum mechanics,” University of Queensland’s Martin Ringbauer says in a news release. “Einstein’s theory describes the world at the very large scale of stars and galaxies, while quantum mechanics is an excellent description of the world at the very small scale of atoms and molecules.”

“The properties of quantum particles are ‘fuzzy’ or uncertain to start with, so this gives them enough wiggle room to avoid inconsistent time travel situations,” UQ’s Tim Ralph explains. “Our study provides insights into where and how nature might behave differently from what our theories predict.” These include the violation of Heisenberg’s uncertainty principle, cracking of quantum cryptography, and perfect cloning of quantum states.

Model of a quantum state |ψ〉 interacting with an older version of itself.

Closed timelike curves are among the most controversial features of modern physics. As legitimate solutions to Einstein’s field equations, they allow for time travel, which instinctively seems paradoxical. However, in the quantum regime these paradoxes can be resolved, leaving closed timelike curves consistent with relativity. The study of these systems therefore provides valuable insight into nonlinearities and the emergence of causal structures in quantum mechanics—essential for any formulation of a quantum theory of gravity. Here we experimentally simulate the nonlinear behaviour of a qubit interacting unitarily with an older version of itself, addressing some of the fascinating effects that arise in systems traversing a closed timelike curve. These include perfect discrimination of non-orthogonal states and, most intriguingly, the ability to distinguish nominally equivalent ways of preparing pure quantum states. Finally, we examine the dependence of these effects on the initial qubit state, the form of the unitary interaction and the influence of decoherence.