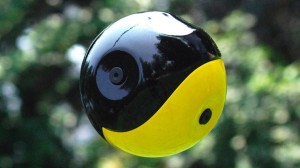 This “camera-ball” is a fascinating idea. With cameras pointing at all angles and sensors to detect It’s orientation it takes a bunch of pictures while mid-air and then stitches them together into a 360 panorama. Not sure if it could handle it, but I’d love to throw this thing down a waterfall. They say It can be used for checking unsafe environments, in firefighting for example, but if you ask me It’s just a fun thing. So far it is just a prototype and not for sale.

Darkball is a throwable night/dark/smoke/fog reconnaissance camera, equipped for real-time wireless transmission of panoramic near IR and thermal video.

Previous: Contact Lenses With Active Zoom Might Soon Be Reality
Next: Homemade 3D Printer Made Of Lego