GSL Season 3 Is now in progress and next week will be the Code S group stage start. It looks like its going  to be one of the most stacked Code S ever. Two weeks ago the Up and down’s was played and we ended up with some surprises but also some great performances from some players. The players who made it out of the Up and Down’s was Nestea, GhostKing, Curious, Maru, Ryung, Line, MC, Seed, AcE and MarineKing. Some of the surprises was that players like MMA, Bomber, Alive and Polt didn’t make it out of there groups.
This Season there where two seeded players and Thorzain and Violet where the two chosen players. Two very good players that recently performed very good. Thorzain recently won Dreamhack EIZO open in Stockholm and also right after that got picked up by Team Evil Geniuses. Violet has also done some amazing performances under 2012 with the latest to win MLG spring arena 2. 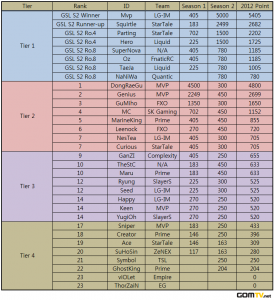 So now in Season 3 we will have 30 players from South Korea and 2 foreigners both from Sweden Naniwa and Thorzain. This week the groups were release and we have some awesome stacked group to look forward to. 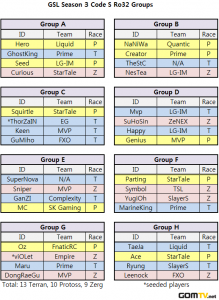 It looks to be Group F that’s the Group of Death this season with players like Parting, Symbol, YugiOh and MarineKing in it. Parting is a very strong protoss. He looked very strong also last season when he ended up losing to MVP in round of 4. Symbol has showed some sick games the latest month with his last performances at GSTL when he reversed all killed IM-SK and also with his 2nd place at MLG spring arena 2. MarineKing as always an insane good player and easily top three Terran in the world right now. And you can never count out anyone so maybe YugiOh shows some awesome play and advance but it looks like that will be a hard task for him.
Also Group G looks like a very hard group with players like Oz, Violet, Maru and DongRaeGu. Oz also he a top player and recently got picked up by Fnatic. Violet like sad before a very strong player right now. Maru a very young and talented terran that also has showed that he can play some amazing Starcraft. You can also never count DongRaeGu away when if he doesn’t look that scary anymore his still of the best zergs.
GSL round of 32 starts the 11nd of June with Group A with HerO, GhostKing, Seed and Curious in. Also be sure to get your stream tickets over at www.gomtv.net because you don’t want to miss GSL season 3. For more info about GSL Season 3 check out www.gomtv.net/2012gsls3/.