ACTA: Riots in Poland – but in Sweden the lid is on tight

Tens of thousands of demonsrants march against ACTA in Poland. In Sweden, it is unclear if the government even knows what  “The next threat to the Internet” is.

The fear that it will lead that network operators being forced to take the role of “cyberpolice” chasing its users for everything from a link on twitter to an attached radio clip in an email.
The Swedish prime minister Fredrik Reinfeldt admitted he knew nothing about SOPA and PIPA while singing the similar agreement known as ACTA.

The Swedish Prime Minister does not seem to be well-versed on the controversial U.S. laws SOPA and PIPA (ACTA expected to have similar or greater effect). In a phone-in to a radio station on Wednesday, Fredrik Reinfeldt answered the following question:

What are your thoughts on the SOPA and PIPA  American draft laws on copyright issues?

– I’m not too familiar with the American legislative proposals, and would not comment on them. But I see no copyright issues so difficult, there have been many great legal alternatives.

Although the U.S. laws SOPA and PIPA been postponed until further notice the new bill ACTA is the new threat to the internet.

Its terrible that a country with Sweden’s status passes a bill like this without any consideration whatsoever, and without the citizens even knowing it…

In Poland, it has led to protests so violent that 24 people were arrested in a smaller town because they include vandalized cars. In Krakow marched 10,000 people on the streets to demonstrate on Wednesday, reports the BBC.

Must be passed in each country 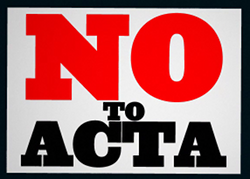 Even online, the protests marked. Polish government sides have at times been down after denial of service attacks. The whole thing escalated further when the news came that the EU Member States, including Sweden, “symbolically signed the” agreement in Tokyo. But so far, it means nothing. For the law to take effect it must be approved by all states and parliament to end the European Parliament.

Previously authorized the Council of Ministers of the EU agriculture and fisheries ministers. This is because there was a “a-point”, which can be pushed through without discussion or negotiation in which Ministers at any time, not only of that which “takes issue”.

But it has long been unclear whether parliament should even be allowed to vote on the issue.

– If true, it’s good, I had heard earlier that perhaps it would only be in the European Parliament, says MP Karl Sigfrid (M), to Nyheter24.

He calls the events surrounding ACTA in Poland for “their FRA-law” in order to compare the reactions, but says that it is unclear what impact ACTA could have on the Internet.

– It’s terribly difficult to know what the agreement will mean. It has not been communicated at all, says Sigfrid.

No official attitude of the government

Nor by the government seems to have some idea of ​​what it actually is in the process of being voted. Press Headquarters of the responsible Minister for Trade Ewa Björling (M), do not even know if the government has no official position on the agreement or understanding of what it could mean.

The interest on home turf is generally very small.

Mark Klamberg, active in the Liberal Party and one of those who were most involved in the FRA debate in 2008, believes that what distinguishes between then and now is that so many disagreed.

– One reason for this debate I think was that there were divisions within both parties and within the alliance. But also some instances, such as SAPO, came with criticism. It created more interest in the issue, he says to Nyheter24.

“It is far down the agenda ‘

Karl Sigfrid (M), which was one of the most vocal FRA debaters, according to Internet issues are not interesting in Sweden anymore.

– Media has logic that things are only interesting when they are new, he says.

Does lack of interest even politicians?

– Yes, there is nothing that people are talking about anymore, it is far down the agenda.