Note, I’m not saying this is real, but these ‘scientists’ claim to have found cities on the moon, and even mining machines. There are even evidence of tunnels that create a theory that the moon is hollow, or maybe even man made. One more theory is that there is an atmosphere and that Nasa is lying to us.

Obviously nonsense but nonetheless an entertaining thought. In the future we will indeed have cities on the moon after all.

While I can disprove this theory with my backyard telescope, it’s fascinating to me that some people would come up with these ideas. But to be honest IMO the truth is just as fascinating.


It is the mark of an educated mind to be able to entertain a thought without accepting it. -Aristotle

The former manager of the Data and Photo Control Department at NASA’s Lunar Receiving Laboratory during the manned Apollo Lunar Program, Ken Johnston, has released quite a number of sensational statements recently in the USA. The specialist said that U.S. astronauts found ancient ruins of artificial origin and a previously unknown technology to control gravitation when then landed on the Moon. Astronauts took pictures of the objects that they found, but NASA ordered Johnston to destroy the images. Johnston did not follow the order. He said that the U.S. government had been keeping this information a secret for 40 years.

Johnston’s startling Apollo allegations have recently appeared in a new book, “Dark Mission: the Secret History of NASA,” co-authored by former NASA consultant and CBS Science Advisor, Richard C. Hoagland and Mike Bara, an aerospace engineering consultant. According to Kay Ferrari, JPL Director of the SSA Program (in a phone call to Johnston last week), it was Johnston “being quoted [as] criticizing NASA in Hoagland’s new book, ‘Dark Mission,'” that prompted her to ask for Johnston’s resignation from the SSA Program. When Johnston refused, citing First Amendment protections of free speech afforded all NASA employees, even those at JPL, Ferrari apparently decided to remove him arbitrarily from the SSA Program this week without cause.

The low quality pictures included in the book depict ruins of buildings, huge dome-like objects made of glass, stone towers and castled hanging in the air.

“I have nothing to lose. I have quarreled with NASA and I got fired,” Ken Johnston said.

Indeed, NASA believes that allegations of the ancient civilization found on the Moon are not serious. The authors of the controversial book also say that President John F. Kennedy, who launched the lunar race with the Soviet Union, actually intended to share extraterrestrial technologies with Moscow. Making a speech at the United Nations Organizations in September of 1963, Kennedy supposedly offered the USSR to organize a joint mission to the Moon.

Richard Hoagland believes that Washington’s interest in the Moon exploration that suddenly appeared after 30 years of silence is based on the lunar findings that the U.S. government has been keeping a secret for 40 years. Russia, China, Japan and even India have publicly announced their plans to work on the exploration of the Moon. The USA, Hoagland said, wants to be the first at this point.

In December NASA announced plans to build an international base on one of the poles of the Moon. The base is to be finished by 2024. Russia’s booster rocket maker, Energia, has a more ambitious program: to build a permanent manned base on the Moon by 2015.

Russia says the base will be built to develop the industrial production of helium-3. U.S. specialists prefer not to say anything specific on the matter. To crown it all, China launched its first satellite to the Moon on October 24. China also intends to launch a lunar base and an unmanned space probe to the Moon by 2010.

Non-radioactive isotope of helium, helium-3, is a powerful fuel for the nuclear synthesis. Only six tons of this fuel would provide enough energy to power a large European country for one year. The qualities of the gas (pollution-free and very high output) make many countries treat the perspective as seriously as possible. Germany, India and China conduct a number of research works to develop methods of helium-3 extraction.

Hoagland and Johnston also intend to prove that NASA virtually acts as another defense department of the United States, entitled to classify important technical and scientific information without the control of the U.S. Congress.

Hoagland says that American astronauts could secretly deliver samples of extraterrestrial technologies from the Moon to the Earth. The technologies, the scientist says, push world’s leading countries into a new lunar race. “Unlike the previous space race between the USSR and the USA, the new one will determine the life of every single human being on Earth,” Hoagland said.

Hoagland and Johnston think that the USA deliberately intensifies shuttle launches in order to shut down the program ahead of schedule and start using new the spacecraft, Constellation, that will let the USA land on the Moon again.

Richard Hoagland says that NASA conceals a number of other secrets, including the discovery of microbes on the surface of Mars. The discovery was supposedly made by unmanned space probe Viking in 1976.

Based on news reports of Russian news agencies

Clearly anyone who ever read anything about astronomy knows this not to be true, no cities on the moon and no life either. But one day we will be the life of the moon with cities. This moonbase that NASA plans to 3D print on the moon for example. 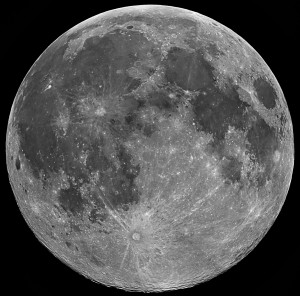 High res picture of the moon