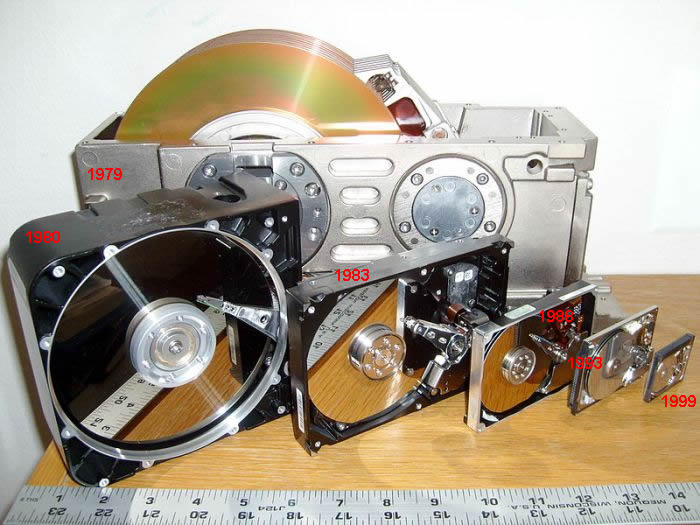 Harddrives have changed a lot since 1979 thats for sure. This thing you see here on the picture is a 5MB 8 inch harddrive from Shugart, and now we can fit gigabytes onto hardrives as small as fingernails. We can even make wireless harddrives. Click more to see deatils on these fine specimens and also a look at the worlds smallest harddisk.

1993 125,000MB 1.8 inch: 54 mm × 8 mm × 71 mm = 30.672 cm³ This form factor, originally introduced by Integral Peripherals in 1993, has evolved into the ATA-7 LIF with dimensions as stated. It was increasingly used in digital audio players and subnotebooks, but is rarely used today. An original variant exists for 2–5GB sized HDDs that fit directly into a PC card expansion slot. These became popular for their use in iPods and other HDD based MP3 players.

The Guinness Book of World Records has credited Toshiba with creating the world’s smallest hard drive. These hard drives are less than one inch wide–about the size of a postage stamp–yet can store up to 4 GB. Only 7 years ago 4 GB hard drives were common in desktop computers. Toshiba unveiled these diminutive devices in January, and expects to begin producing them by the end of 2004. On the other end of the spectrum, 400 GB hard drives are now available. For much of the 1990s disk drive capacities were doubling every year. The rate of increase has slowed substantially, but hard drives are still doubling in capacity every other year, essentially mirroring Moore’s Law. This trend should continue for at least the next several years, resulting in terabyte desktop hard drives and 20 GB microdrives by the end of the decade. Only 50 years ago IBM introduced the first hard drive, called RAMAC. RAMAC was a contraption the size of several washing machines, and was capable of storing 5 MB. Toshiba’s microdrive is less than 1/1000 the size of RAMAC, yet can store almost 1,000 times as much information. Thanks to h00kw0rm for the heads-up.

Previous: How to get premium support from Dell Computers
Next: Internet Story