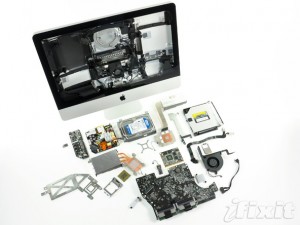 Yesterday apple released a new set of imacs, we didn’t post them because the only new thing was the “thunderbolt i/o port” but since its only apples lame excuse for usb5.0 combined with hdmi. Either how the teardown might be a little more interesting. So here we go:

as usual, and the investigation starts with the detachment of that familiar LG-produced IPS display and a Sony Optiarc optical drive, followed by the discovery of an Intel controller for the solitary Thunderbolt port on board (there are two on the larger model). Other notables include an AMD Radeon HD 6750M graphics chip and a 2.5GHz Intel Core i5 CPU

You have found one of our older posts.

In any case we hope you find this post enjoyable! Feel free to contact us if you notice any issues.

Previous: Another iphone dock that glows
Next: A days Google searches visualised in a spectacular 3D map