When I received the powerbank I was pleasantly surprised. I expected another run off the mill powerbank, but as opened the package I realized this one is equipped with some pretty useful technologies. The first being quick charge, both quickcharge 2 and 3. This means it will charge compatible devices, usually android phones, at much higher speeds. It can charge a device with up to 3A of power. This is especially useful for people like me who have android phones with high battery capacity, they just charge way too slowly without quick charge technology. 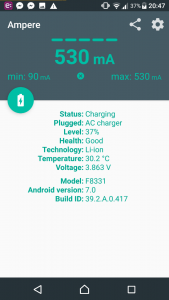 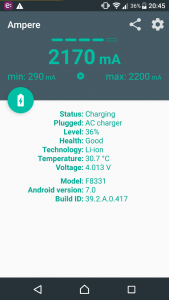 Here you can a measurement of the power output freom the two ports. (The USB-C port can also both output power as well as charge the powerbank)

The second technology it has is smart charge. This means it will adjust power output to suit the device. While the smart charge port doesn’t output as much power as the quickcharge port, it does charge devices in a away that is better for long term battery life. This port is especially useful for iphones and other devices that don’t directly support quick charge. An iphone will charge fast enough through this port, and so that’s the one you want to go for if your device doesn’t support quickcharge. Otherwise the powerbank looks pretty nice, it isn’t too heavy, and fits nicely in your pocket. Despite this it has a pretty massive capacity, at 15000mah. When I fully charged I could use the powerbank to recharge my Xperia XZ to a full charge once per day three days in a row. Which is more than I would have expected from previous external batteries we have tried in the past.

You can get it on Amazon for only £18.99, which is ridiculously cheap considering the capacity of this thing.