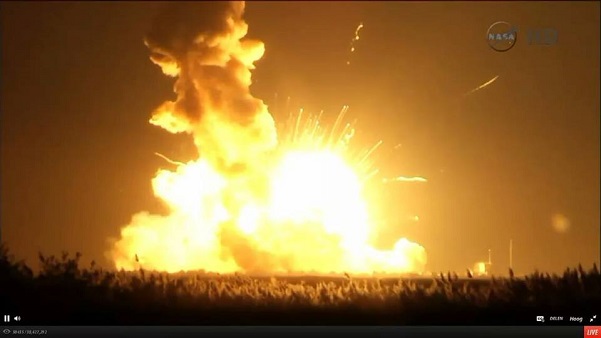 The Antares rocket was supposed to bring supplies to the ISS, now it seem they will have to wait a while longer. The rocket exploded shortly after launch due to an (at this time) unknown problem.

Monday’s Antares rocket launch will mark Orbital Sciences’ third official cargo mission to the International Space Station for NASA under a $1.9 billion contract, which calls for a total of eight delivery missions. The mission, called Orb-3, will launch a robotic Cygnus spacecraft – also built by Orbital – that is filled with 5,000 lbs. of food, water, experiments and other gear for the astronauts currently living aboard the space station.

LATEST UPDATE: The Orbital Sciences’ Antares rocket has exploded upon liftoff. You can see a video replay of the rocket explosion here: Cygnus Cargo Spacecraft Destroyed In Launch Mishap . The launch mishap occurred just after the rocket’s 6:22 p.m. EDT (2222 GMT).