Today Steve Wozniak, co-founder of Apple computers had a keynote at the 2014 CeBIT in Hannover. It was quite interesting. You can see some highlights here.

So, Steve Wozniak had a lot to say, I have selected the things that caught my attention the most.

He mentioned how he feels that Apple isn’t anymore trying to market what a great product they have, but instead they market that their product is now available in three different colors. Because apparently that’s what sells. Something that seemed to get everyone’s attention was when Steve Wozniak, the man who wants the entire internet on his wrists, said he doesn’t actually have broadband at home.  He said, in fact his internet is so slow, he can’t even stream Netflix. The matter of whether our data is secure or not came up, and naturally that led to a discussion on the NSA mass surveillance scandal. Wozniak was very clear about the fact that he is strongly against what the NSA has done. When he was asked whether Edward Snowden is a hero, he promptly responded “Absolutely!”

He has even been trying to meet with Snowden, but obviously that is not the easiest of tasks. However he recalled at one time during a visit to an Apple museum in Russia a person who he thought looked a lot like Snowden came up to him for an autograph. When Wozniak said “Hey, you look a lot like Edward Snowden” They guy just walked away, and Steve couldn’t find him again.

He believes strongly in freedom on the internet, and he wasn’t afraid to say that he feels that our freedom of speech is being suppressed.  And while European agencies have also been spying on things they had no right to, he mentioned that at least the European union is doing something about this. He was asked whether he thinks the US should do the same as Europe in creating laws to prevent governments from continuing to do this. He said that the US should already be ahead of Europe, but that’s not going to happen. And then he expressed his dislike for how slow politicians in general are, both to understand and react.

“If Apple and Microsoft had implemented PGP (encryption) as a default, nowadays all emails would be secure.”

Naturally the question came up whether Apple has been assisting the NSA in stealing information by building a secret backdoor into Apple devices.  The question was ” So, can we trust Apple”, the response was, “Honestly? I don’t know”. 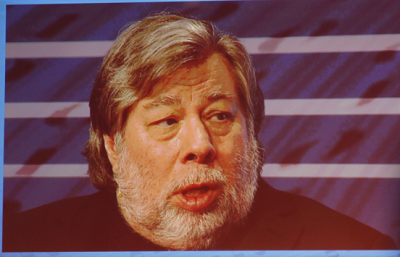 “You can’t stop the steamroller of technology change.” -Steve Wozniak

Steve Wozniak loves using that expression, he did quite a few times during the keynote.

A lady asked him what he thinks about video games and computers making younger generations less productive. “Because they get addicted to them” Wozniak laughed and said “that is one of those steamrollers of technological change, can’t stop it, just get out of the way”. He clearly thought the idea of computers making children less productive right out silly, although he did admit that video games are probably unnecessary. Oh and then in the middle of it all, Superman came and tried to steal the show.
As you can guess he was kicked out before he made it onto the stage.

The singularity also came up, in which computers are so advanced that they one day develop a consciousness on their own. Steve said he had always believed that that day would not come during his lifetime anyway, but now he’s not so sure anymore. He said that when we do reach the singularity it will hardly be like in the terminator movies. Instead he sad this:

“Computers are going to have feelings for us & become our friends. And we’ll be the gods who created them” 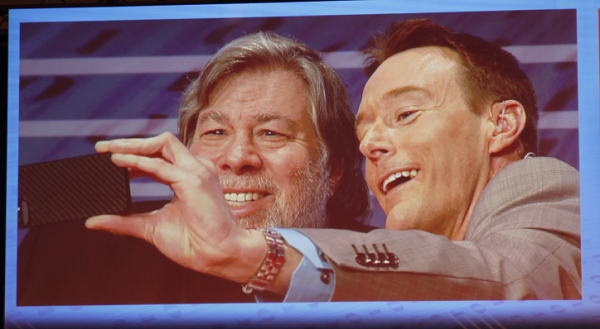 Then the host decided that Steve and him should take a selfie and try to get it retweeted more times than Ellen deGeneres Twitter crashing selfie. And that brought up an interesting point.

As the host was working on getting the pic uploaded Steve Wozniak said:

“I would like just to speak to my phone “tweet, here I am at the CeBIT” and that’s it!! All this left brain stuff was the old way.” Also an old Apple II signed by Steve Wozniak was given away in a lottery. 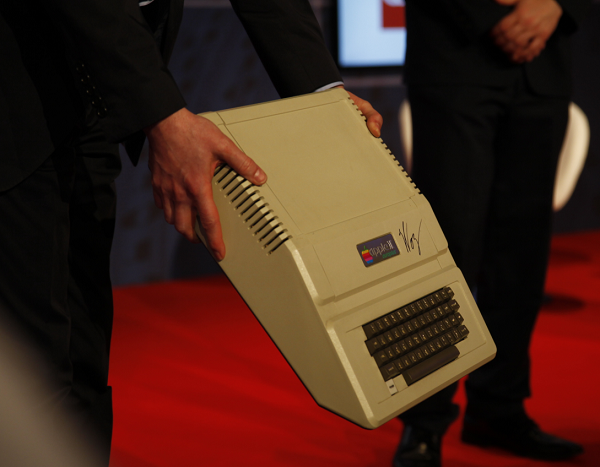 Another interesting thing was this collection of whiteboard drawings made about the keynote, during the keynote. Looks pretty cool, and also a handy summary of the keynote. 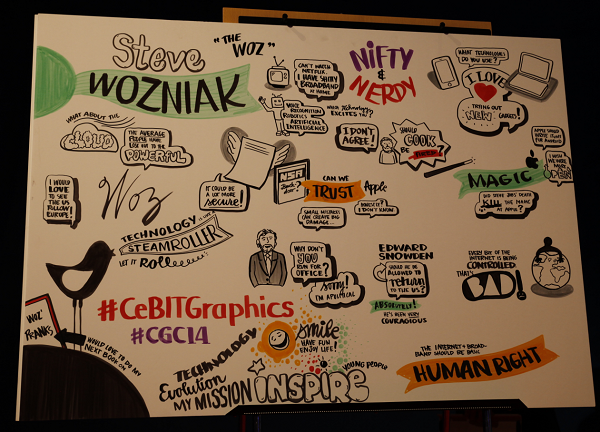 Last but not least, when asked when his autobiography would come out, he said he had no time to do one right now. However he said that his next book is likely to be about all the pranks he has done. He says we would be shocked.