Last spring, students from MIT introduced something called “smart sand.” Smart sand was a pile of tiny little robotic cubes endowed with the capability of autonomously replicating any 2D shape that you poured them over. However that smart sand couldn’t move by itself: you had to shake it around a bunch to get it to do anything. But not any longer, now they can assemble into any shape you present them, all on their own. 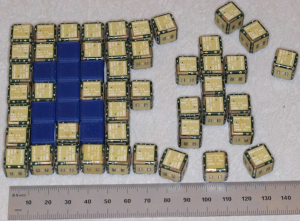 It moves by spinning an internal flywheel at up to 20,000 rpm and then suddenly applying a brake, the conservation of angular momentum causes the entire cube to flip, and in some cases, even jump an appreciable distance. There’s only one axis of movement at the moment, but there’s always the potential to add two more flywheels to enable movement in any direction. The cubes stick to each other with an arrangement of magnets that encourage them to pivot around edges while sticking to faces. Clever but inefficient, future versions will most likely feature electromagnets to enable switching off the magnets.

So what is this good for?
The researchers believe that a more refined version of their system could prove useful even at something like its current scale. Armies of mobile cubes could temporarily repair bridges or buildings during emergencies, or raise and reconfigure scaffolding for building projects. They could assemble into different types of furniture or heavy equipment as needed. And they could swarm into environments hostile or inaccessible to humans, diagnose problems, and reorganize themselves to provide solutions. Whereas the current blocks are individually controlled by their handlers, the new blocks have enough processing power onboard to do some things autonomously. The team is also working on new software to control them.

Romanishin told MIT news, “We want hundreds of cubes, scattered randomly across the floor, to be able to identify each other, coalesce, and autonomously transform into a chair, or a ladder, or a desk, on demand.”

Also the researchers seem to be at least fairly sure they won’t start self-replicating and take over the world at one point.