A largish Pacific island that appears on Google and iOS Maps, Bing and other online services has been declared not to exist by team of Australian scientists who spent more than three weeks looking for it.

The Times Atlas of the World labels it as “Sable Island.” If it did exist, it would be located in French territorial waters.

But the island has been shrouded in mystery, as it appears as nothing other than a black shadow in Google’s satellite view.

There’s no satellite imagery for the open ocean, instead a rendering of the ocean floor is shown by most online maps. In places where there’s land though, the satellite swoops by and takes a few shots. That’s probably what happened here, but since there’s no land to photograph, all it got was a few shots of the dark blue ocean.

What’s interesting is that Nokia Maps, for example, uses the same satellite imagery, showing a dark strip as well, though Sandy Island is not marked as a location on the regular map. The same is true for Mapquest.

In an attempt to solve the puzzle, a group of scientists from the University of Sydney set sail on the Southern Surveyor, a new Marine National Facility research vessel.

“We wanted to check it out because the navigation charts on-board the ship showed a water depth of 1,400 meters in that area,” Said researcher Maria Seton.

Yet the island does appear on the ship’s navigational equipment. 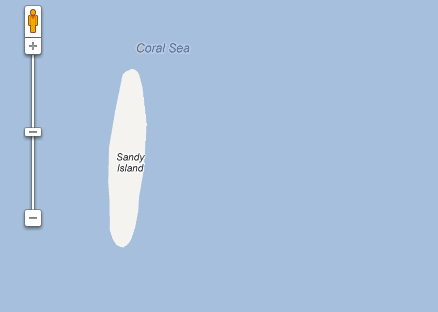 After more than three weeks combing the seas the scientists found no trace of it, nothing in fact – except for deep ocean.

“How did it find its way onto the maps? We just don’t know, but we plan to follow up and find out,” Seton said.

A search on Google Maps shows it lying north west of New Caledonia, a French-governed island 1,210 kilometers northeast of Australia.

A theory is that the island has sunk down below sea level. Because of rising water-levels and corrosion  But the scientists didn’t seem to be able to find anything at all.

More likely is that an early error got repeated as new maps relied on the older, wrong data which they assumed was correct.

You can see the “island” for yourselves here on google maps.