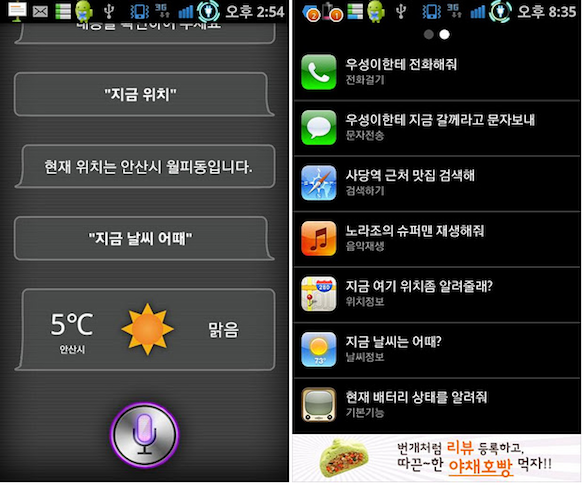 Siri is unquestionably the killer app for Apple’s iPhone 4S. The voice-based personal assistant has been drawing oohs and aahs since it the iPhone 4S was first announced. Not wanting to be left too far behind, Google naturally has a competitor in the works. Their version is apparently dubbed Majel, after Majel Barrett Roddenberry, wife of Gene Roddenberry and the actress who voiced the computer on every Star Trek series.

Well, it seems that a Korean Android app developer didn’t feel like waiting for Majel to be ready, and went ahead and put a Siri clone in the Android App Market. The app, Speerit, is a clone, not just a competitor. The icon is a slightly modified version of Siri’s microphone, and the description says “REAL Siri for Android.”

The app is currently free, but unless you speak or understand Korean, you’re pretty much out of luck. Though the app apparently understands English, it speaks only Korean. At present the app is still available, but don’t be surprised if it gets yanked sometime in the near future. Obviously fake or not, Apple isn’t likely to sit idly by while someone else uses Siri’s icon and name without their permission.