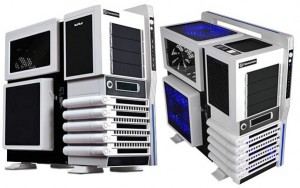 Remember the Level 10 case from Thermal take? The most awesome minimalistic gaming chassis ever. However very big bulky but most of all expensive. Later Thermaltake released the GT version of their level 10 chassis.
Now we have reached version 3, Level 10 GT Snow Edition, and it looks awesome if i can say it myself. However some say it looks cheap and tacky. I want one, enough said.