So submerging computers in cooking oil isnt really a new concept. Many people do this for increased cxooling And neither is cooking food on your computer new. I’ve seen videos of people frying eggs on a graphics card without its cooler attached.

But this is somewhat new, some guy submerged his compute, the started playing some really hardcore games while putting down different fries and stuff. Have a look its kind of entertaining!

I’m not sure which forum to post this, but I just wanted to share one of my stories with you guys

. I had recently read a few articles on submersion cooling, where you take your computer and dump it into a tub of non-electrically-conductive oil. It seemed to work really well, and was cheap. So I saw it as a type of poor man’s water-cooling.

I bought a large aluminium oven tray and 9 litres of canola oil. 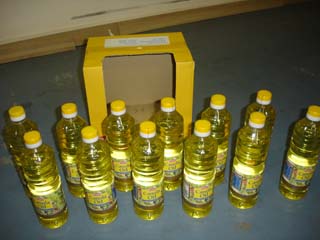 Since I didn’t really want to screw up my good computer, I tested it out on an old Pentium II 266 with Nvidia Riva TNT2 Ultra. I placed the motherboard in the tray, and began pouring canola oil all over it, until it was partially submerged. 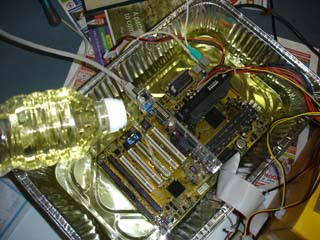 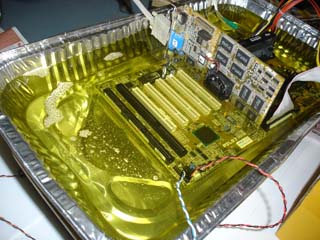 And it worked. The computer booted into Windows 98 fine, and I even started up good old Quake 3 and started playing. 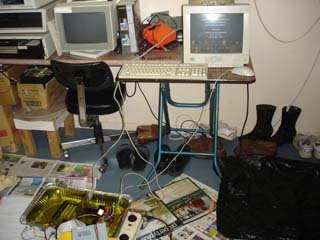 But I soon became hungry for a fried snack – and since I had used all the oil in the house I couldn’t fry myself anything. Then I had a brilliant idea. Why not use the oil that the computer’s in?

I placed an electric stove under the aluminum tray, and turned it to full blast. Soon, the oil reached frying temperature and I dumped a few chips into there. Meanwhile, the computer was still happily chugging along running Quake 3. 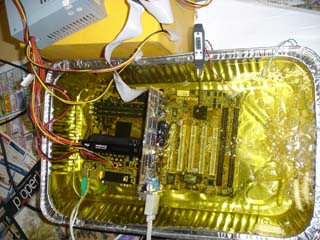 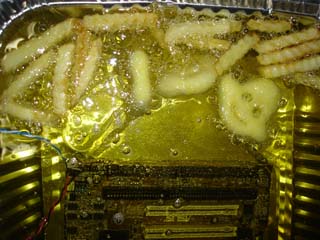 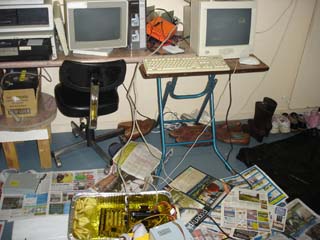 Eventually, though, the strain of 120 degrees C ambient temperature and the load of Quake 3 caused the computer to overheat and crash. I rebooted it, and it loaded back into windows. Although Quake 3 still crashed when trying to play. At that point, the chips were ready. I turned off the heat and enjoyed my snack while I waited for the oil to cool so I could use the computer again. 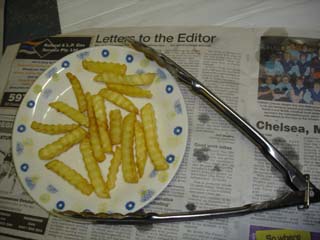