By now everyone knows, humans have landed on a comet for the first time ever!!! It’s going to be quite exciting to see what we can find there.

So far not much of the data gathered has been released. But here are some photos from the comet landing. Check it out!

Philae was released at 08:35 GMT and took seven hours to reach comet 67P. The first ever comet landing Successful touchdown of the landing robot Philae marks the climax of 10 year, 6.4 billion km journey . Esa confirms the harpoons designed to attach Philae to the comet did not fire, but its smaller screws appear to have dug into the surface 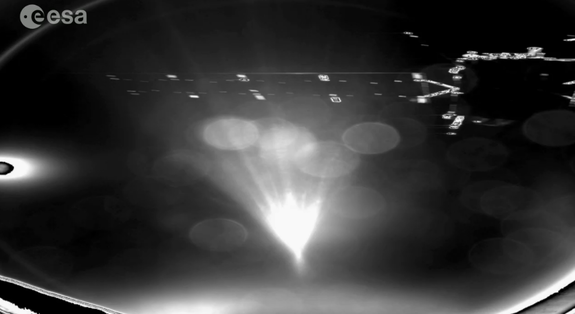 The Philae lander on its way to the comet, photographed by the Rosetta spacecraft. Images of  the comet’s surface just seconds before touching down. Esa tweeted this remarkable picture from comet 67P confirming that Philae is successfully on the surface, but scientists have now revealed that the probe is in a cave. This means it might not be receiving the amount of sunlight it needs to recharge its batteries and survive on the surface. At the lower middle can be seen one of the three legs of the lander, each of which contains an ice screw Here we can see where the probe was meant to land and where it actually ended up. A collection of five images from the Rosetta spacecraft’s OSIRIS narrow-angle camera is being used to try to identify the final touchdown point of the lander Philae. The European Space Agency marked the suspected landing area with a red cross.

Philae appears to have landed on it’s side in a sort of cave, which doesn’t entirely ruin the mission, but it’s the unfortunate result of the harpoons not firing. Several images have been taken on different sides of the lander, illustrated here with the pictures arrayed around it Even Google is excited!